SIAD Macchine Impianti (SIAD MI) was selected by the Technology Group Wärtsilä, specialized in the design and manufacture of propulsion, power generation and gas systems, to design and build a booster compressor for a Floating Production, Storage and Offloading Unit (FPSO) operating in the offshore marine area of Foinaven, to the west of the Shetland Islands.

The FPSO is a type of ship used for offshore oil production. It is indispensable for the extraction and storage of oil in areas far from the coast, and therefore not accessible by pipelines.

The system design required a very high degree of customization due to the particular installation conditions. SIAD MI’s engineers had to adapt the compressor design to the tight spaces in the FPSO. Despite its small size and the reduction of space between the various components, the Booster Compressor is characterized by high performance – it can reach 360 bar in delivery – required to support the ship’s propulsion system.

To cope with the high pressures involved, it was also necessary to adopt specific technical solutions, using special components and materials suitable for this type of application.

In order to reduce as much as possible the impact of the compressor vibrations on the ship, the skid compressor was installed on vibration dampers which were selected after an accurate dynamic analysis and then trialed in the SIAD MI factory during the testing phase.

Due to the limited space on the ship, during installation it was necessary to divide the compressor booster into two sections: first of all a vertical base with vibration dampers was lowered from above. Then, two separate skids were installed. The first included the bare compressor, the pipes, and the instrumentation; the second contained the electric motor. The two parts were then combined into a single system ready for activation.

Despite the technical complexity, the project was completed within the set deadline and the compressor also passed the supervision test by a third party that will issue a certificate of suitability for its use in the marine sector. 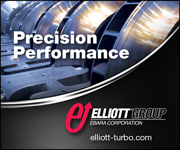 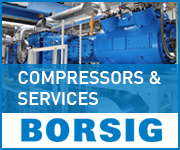